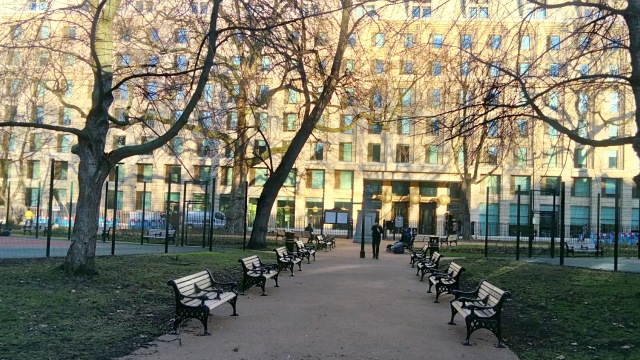 This Bloomsbury garden, a private space for 200 years, was opened to the public in December 2016 after a complete refurbishment in connection with the rebuilding of the university halls situated on its east side. The gardens were extensively remodelled and replanted as part of the redevelopment and the student halls are now also known as “The Gardens”. A set of gates has been inserted into the west side of the gardens, providing a new pedestrian link into Burton Place and beyond to Tavistock Square and the Euston Rd. The open space at Cartwright Gardens has been made significantly more accessible to wheelchair users and those with mobility impairments thanks to the installation of hard surfaced paths. The trees in the open space include a perimeter of some of the most majestic specimens of London Plane in the neighbourhood. Nest habitats for wildlife have been recently installed. There may also be opportunities to encourage a greater number and diversity of resident birdlife. 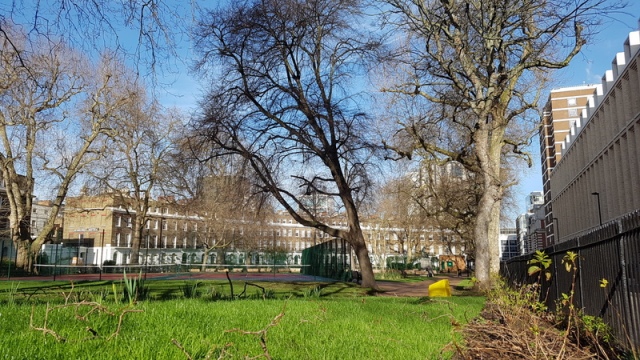 Cartwright Gardens, originally known as Burton Crescent, occupies land on The Skinners’ Company estate, which was originally known as Sandhills or Sandfield. It remained predominantly farmland until the early 19th century, when part of the estate was leased to James Burton (1761-1837), the builder who was largely responsible for developing the nearby Foundling Hospital estate and the adjacent Bedford estate. In 1811-17 he built the elegant Burton Crescent, of which 37 houses survive today (Nos. 27-63). A painting of a panoramic view of Burton Crescent in the Sir John Soane Museum, dated c.1817, shows the garden with lawns and shrubs.

The first Ordnance Survey map of London (1871) shows the gardens in detail, with four entrances on the crescent side and one in front of the Cartwright statue. There are trees and paths on the perimeter with shrub beds and two large oval areas of lawn with four large trees in the middle. There is a small building at the north end of the gardens. In 1928 The Report of the Royal Commission on London Squares describes the gardens as being surrounded by a sparse privet hedge with one half laid out as ornamental gardens with lawn and the other half with tennis courts – a significant departure from the original layout. 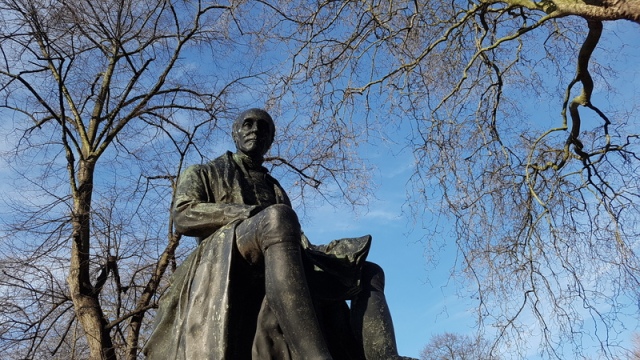 University students’ accommodation, replacing older buildings, was completed in the early 1940s and was redeveloped in the 1960s. All this was swept away in 2014 to be replaced by the Garden Halls, completed in 2016. The Cartwright Gardens Community Liaison Group (CGCLG) was established, a group of residents and businesses which meets regularly with the University of London who manage the student halls and the open space.

The four tennis courts on Cartwright Gardens have been open to the public for many years, though inexplicably two of the tennis courts were scheduled for destruction in 2013. The community rallied around to save these much loved public sports facilities which are now refurbished and open to all. The courts can be booked through the student halls reception on 0333 241 3485. A tennis league will be established in the coming seasons and a local hotel has kindly volunteered to sponsor a trophy. 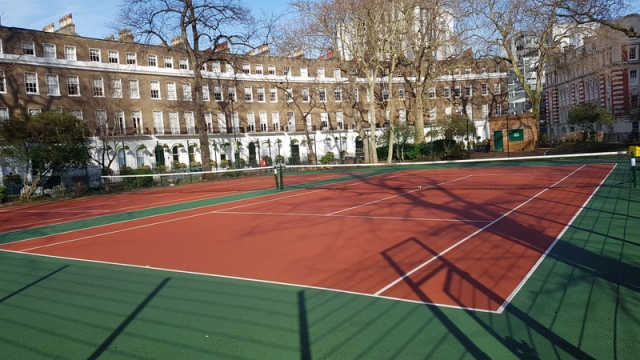 Cartwright Gardens is Bloomsbury’s newest public space, open to the public during daylight hours, and the Group hopes it will develop into one of the jewels in the crown of our community. They welcome input from the local community and if you would like more information or to get involved, please email info@cartwrightgardens.org